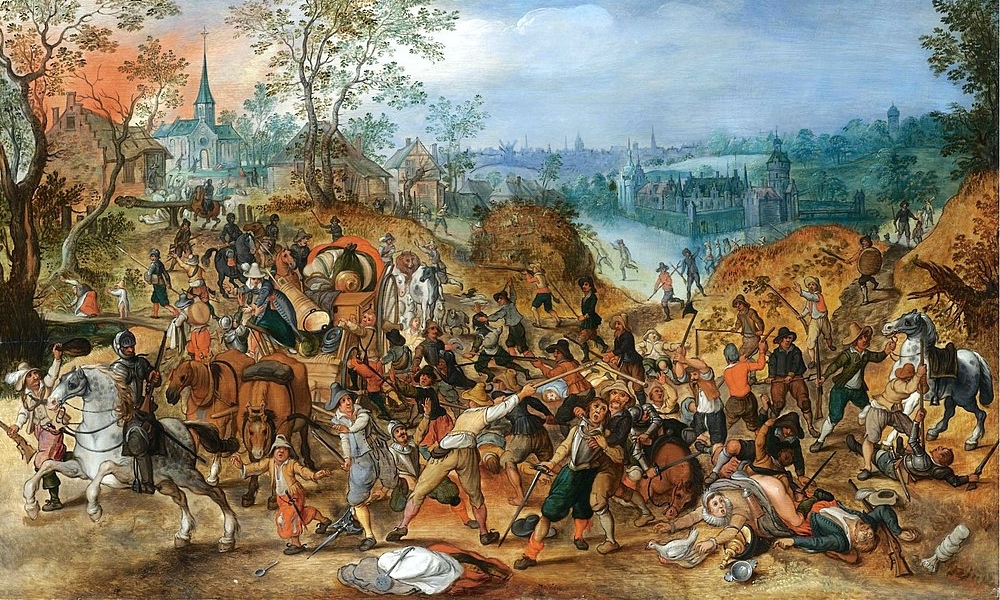 Sticking with the Task: Some Reflections on Hope and Co…us.

This year, the 350th anniversary of the death of one of the most interesting educators of all time, my aim is to post a piece in each month of 2020 about John Amos Comenius. I am also writing this during the early days of state-wide lockdown where I live as part of the collective attempt to slow the spread of coronavirus. You can fill in the ellipsis in the title of this piece whichever way you like. (Why it might still be worth writing about Comenius during a coronavirus pandemic is part of the point.)

At times of significant crisis, like the one in which we now find ourselves, it is easy to start feeling that all priorities have radically and permanently shifted. I remember musicians posting in the wake of the attacks of September 11, 2001 that it felt hard in that moment to justify making music for a living. It felt irrelevant, a trivial thing to do in the wake of such trauma. I have been feeling something similar at times this week. As the people and institutions with which I am personally connected are impacted physically, socially, and economically by the turmoil, deep social divisions are once more thrust to the fore in the public response. I am experiencing the same cycles of optimism, pessimism, anxiety, disengagement, over-engagement, etc., that I suspect are afflicting most. As I try to find energy to work at home on detail-oriented, long-term projects, others lurch into hyperdrive or lose their employment, and I have been caught up in canceling long-planned events and re-imagining processes and timelines. I am not surprisingly finding it more difficult than usual to find focus. It is easy right now for work on educational matters–other than getting online classes running–to feel irrelevant with schools closed, students isolated, graduations canceled, and people dying in growing numbers. Better, perhaps, to have been a doctor, or at least switch to making face masks.

As so often, Comenius is a tonic. A part of what has always impressed me about him is the way in which he doggedly labored at contributing to the improvement of education throughout a series of life circumstances that would have tested the endurance of the best of us. When he was 26, and had recently committed himself to the life goals of reforming the church and reforming education through work as a pastor and teacher, the Thirty Years’ War broke out. His small denomination in Moravia was targeted for persecution, and before long his town was attacked and he was forced into hiding, leaving his pregnant wife and first child with relatives in the occupied town. Plague broke out in the wake of the fighting, and his wife and both children succumbed, leaving him bereaved, homeless, and isolated, “miserably in hiding for fear of human fury.” He wrote,

“Woe is to us on all sides: a cruel, bloody sword is destroying my dear homeland; castles, fortresses, and strong cities are conquered; towns, villages, splendid houses, and churches are plundered and burned; estates are robbed, livestock is taken and killed; the poor populace is subjected to suffering, torture, and here and there even murder and capture. … It would seem that everything will perhaps soon be turned into a desert.” 1

As a pastor he traveled with his flock into exile, never to return to his homeland, but he did not leave tragedy behind. Years later, he traveled to England to consult on the reform of education, only to see the English Civil War break out, leaving him sidelined. Towards the end of his life, after he and his congregation had taken refuge in Poland, war broke out between Sweden and Poland, and the town where they lived was ransacked. His house was burnt down and he lost everything, including manuscripts over which he had labored for decades. Meanwhile, when the Thirty Years’ War ended, the Peace of Westphalia had made no provision for the Moravian brethren, leaving them permanently without a homeland. Prophecies about their eventual restoration which he had trusted and helped to publish turned out to be false. One of the tasks that Comenius found himself tackling as the senior bishop of the Unity of Brethren was to write instructions for its members about joining other churches as dissolution of the denomination became a real possibility. In his Via Lucis (Way of Light), he described himself as “one of the humble men of heart, the aged Comenius, whose life went down in sorrows, and his years in lamentations.” 2 Comenius lived and died as one intimately familiar with instability, insecurity, loss, and the language of lament.

What remains striking to me through all of this is the degree to which he remained fixed on his long-term goals of working toward the gradual improvement of education, and on the fundamental commitments that drove them. He wrote prolifically, supervised the creation of new textbooks, and personally led school reforms. At the end of his life, lament was not the only note in his writing. In fact it was not even a particularly prominent note. In his last writings, at which he was laboring just before his death in 1670, he was still insisting that

The answer to our prayers depends upon our care and sweat and watchfulness, and we should not wish it otherwise. For so it has pleased the Creator of the universe now and forever, in accordance with his wisdom that the most important things are produced only at the cost of great effort. Cheap things are different. Mud, sand, and rocks are available whenever you like, but metals and jewels need to be excavated from the bowels of the earth.3

Though at times excavating in profound darkness, he continued to chip away at his long-term tasks, professing as his motivation his trust that the redemption of all things was secured by God calling us to cooperation rather than by blind optimism and his awareness that any labor was to be grounded in love of God and neighbor. In words that seem quite fitting amid the current range of responses to the call for social distancing, he wrote that:

To wish well only to ourselves and not also to others is selfishness, nay, jealousy, which is forbidden to the sons of God like open folly and iniquity, making the part dearer than the whole and oneself dearer than the human race, and eventually the creature is deemed to be dearer than the Creator, working for itself instead of for God through all things. 4

As we all try to figure out how to respond to abrupt disruption, some educational commentary is naturally focusing on the need to constructively seize the day and embrace the paradigm shift as schooling forcibly moves online. Education, we are told, will never be the same. There is likely some wisdom here, and I would not wish to suggest that we should be acting as if nothing had changed. We have to adapt and serve as best we can in what Comenius called the “kaleidoscope” of changing life circumstances. Yet my sense is that Comenius would both urge the need for deep educational change in even the calmest times and mistrust a headlong rush into future educational practice driven by the surges and inspirations of the chaotic moment. I draw from his writing an insistence that even when war, plague, and bereavement camp around, it is a manifestation of hope to keep working at the slow, patient details that frame the working out of faith, hope, and love into educational practice.

Such patient details are easily swept aside as events accelerate and crisis fosters listlessness or brave enthusiasm, yet one encouraging sign that I am seeing in interactions with colleagues is the willingness to take time to carefully think through the consequences of each step forward for the wellbeing of our students and our consistency with our core commitments. As I embark on my own daily work, Comenius reminds me to continue to turn willingly to tasks that patiently invest in a redemptive future. This moment calls not only for change, but for patience and diligence. Some aspects of our calling have not changed. It seems a worthy dream to be able in the end to say with Comenius,

I have done what I could. If the weakness due to old age and overwork or the misfortunes and distractions of a busy life have prevented me from doing much more, I trust that I shall be forgiven. I shall not be the first nor the last of those who have wished to do more than they could manage, that is to say, who have devoted themselves wholeheartedly in pursuance of the public good although their strength was failing. … I have been able to fulfil my share in the will of God, who distributes his gifts impartially. 5

1. These quotations are from his work Truchlivý (The Sorrowful ), quoted in Daniel Murphy, Comenius: A Critical Reassessment of His Life and Work. Dublin: Irish Academic Press, 1995, p.12.